Asterix: The Mansions of the Gods

The story of Asterix and cinema is an old one. The little Gaul has already been the subject of nine animated film adaptations since 1967, as well as four feature-length live-action films since 1999. Strangely, none of them have ever used the technique of 3D animation until now. That, as well as the inevitable arrival of stereoscopy, makes The Mansions of the Gods a big first for the franchise.

The Parisian studio Mikros Image was chosen to produce the film, which was their first feature-length animation project. First, the team had to prove that the world of Uderzo was a good fit for stereoscopic 3D animation. To do so, they ran a series of tests directed by animation supervisor Patrick Delage. Once they’d been given the green light, Mikros Image set up shop in a specific location: an old garage in Levallois.

They had a considerable challenge before them: to produce an 80-minute stereoscopic 3D film in barely 30 months! “We had to develop a production pipeline designed for animated feature films,” says Nicolas Trout, Production Director. “That meant making decisions about tools and software that would impact the film’s entire production process.”

They chose Maya for 3D, Nuke for compositing, Katana for lighting, Arnold for rendering, Houdini for special effects, especially the fluids, and Octopus and Shogun for project monitoring. Several “in-house” software solutions were also added to the lineup for the project to ensure that the required connections were made and to meet the specific requirements of Asterix: The Mansions of the Gods, particularly in terms of animation.

As executive producer of the film, Mikros Image oversaw the part of the work completed in Belgium by the Grid and Nozon studios (settings, animation, and rendering) as part of its co-production agreements. A team of a dozen engineers and technical directors supervised by François Zarroca, Technical Director of Animation, took care of all the pipeline-specific processes.

A Design Halfway Between Realism and Comic Strips

The set design was based on the look of the environments in the comic strip, of course. “We extrapolated, putting the characters in a world that’s a little more open, lush and realistic,” says co-director Louis Clichy, who has previously worked at Pixar on films such as Up, Ratatouille, and WALL-E. “For example, with the forest, we wanted to create a sort of fantasy version of the Forest of Brocéliande, but not like a Disney fairy tale; we wanted something very organic, which is extremely difficult to do in 3D. Inversely, we didn’t extrapolate much when it came to the Roman style, which features geometric lines that contrast sharply with the forest world. As for the mansions of the Gods, they call to mind Caesar’s Palace in Las Vegas. I wanted to make Cesar a real bad guy, so his palace is a very cold building, with icy marble, and we emphasized the moments in which the character appears in near-total darkness.”

When it came to designing the characters, the two directors, Louis Clichy and Alexandre Astier had to choose between extreme realism, with the characters’ hair for example, and a design closer to the comic strip. “Too much realism would have made the characters too simplistic,” says Astier. “We opted for something in between: We’re clearly in a cartoon world, but with a high level of detail in terms of the textures, the grain, and the patina of the clothing. And we worked with contrasts and the shadows falling on the characters, which is exactly what we try to avoid in a live-action film.”

Animation: Staying True to the Spirit
Clichy had strong opinions about the animation. “Patrick Delage and I brought texture to the characters by adding a more realistic side to what started out as a fairly cartoonish design. The animation was produced using the keyframe technique. Like Pixar, we didn’t use motion capture because it doesn’t provide enough visual intensity and diminishes the actors’ work. The actors were filmed so that we could get ideas from their movements from time to time, like Elie Semoun who is particularly expressive, or Olivier Saladin (of the French TV show Deschiens), who was our inspiration for one of the senator characters.”

Delage had done an animation test for author/cartoonist Albert Uderzo back in 2004, and Uderzo approved the style he chose right away. To prepare for The Mansions of the Gods, our director of animation worked for two years on faithfully recreating Uderzo’s drawings in a three-dimensional context. “My reference point for this film was obviously Uderzo’s drawings. I absolutely wanted to see the funniest character poses from the comic strip on the screen. Whenever the shot allowed, we reproduced the drawn characters’ positions identically, then we tried using them as a starting point. Our other reference was the style of American animator Chuck Jones, particularly for the scenes with distinct poses in which nothing moves except the eyes.

The humor comes partly from the characters’ immobility, which hearkens back to the cinema of Jacques Tati, for example. Some of our animators had trouble with this approach in the beginning. They kept wanting to make the characters move; immobility went against all their instincts! To show them the spirit in which we needed to work, I made the animators watch Crooks in Clover and a few scenes from Cloportes. With this film we had the opportunity to use typically French acting styles and gestures.” But in the fight scenes, the Tex Avery style gets the upper hand with good old-fashioned “squash & stretch” techniques that are perfect in that situation.

The small team at Mikros Image
All the characters were first modeled in ZBrush to be approved by the production. It was only later that the team moved on to modeling them in Maya. “I like working that way, I find that it saves time and gives us better mastery of the design,” says Delage.

One of the team’s most impressive achievements was managing to create this full-length animated feature with only fifteen animators! “We started out with a tiny team that February and most of the rest of the team arrived in September, followed by around 20 additional animators in Belgium (supervised by five animators who had begun the project in France, to ensure continuity).

We completed Asterix: The Mansions of the Gods the following June. I’ve always preferred this kind of minimized structure. It’s the opposite of the American method. They make their films in half the time, but they have 70 animators working 70 hours per week, and sometimes even weekends. Personally, I think we deliver better work and invest ourselves more effectively with a small team over a longer period, instead of the opposite. The characters’ interactions are more consistent.”

The most experienced animators were in charge of the characters in the foreground, while the others took care of the background. “This distribution of tasks kept the best animators from wasting their energy on secondary characters, which still require an enormous amount of work,” says Delage. “I worked at Pixar on Ratatouille, and they operate in exactly the same way.”

A Specific Rig
The unique design of the characters meant that we needed to develop a special rig (the armature inside a model that allows a character to move) specifically for this project. “In comic strips, expressions are a very important graphic element. We needed to find solutions that would respect each character’s personality. We used the BCS system, a Maya plug-in that lets you mix different shapes in order to control facial movements. Each expression was designed, modeled. Without that preparatory work, the animation wouldn’t have been as effective, especially not in the minimalist shots. For the rigging part, we had to find flexible solutions using subtle deformers. All the characters have enormous noses. We needed a modular rig, so the poses on the screen could be redrawn for different camera angles as needed.

One of the characteristics of the comic strip is the way Uderzo emphasizes Asterix’s emotions by making the wings on his helmet flap. The animators recreated that identical effect for the film. The wings had to seem like they were directly connected to the character’s nervous system, to reinforce the impact of the facial animation.

For Delage, overseeing the animation of Asterix: The Mansions of the Gods was like traveling back in time. “When I graduated from Gobelins School of Animation, my first job was actually working on Asterix and the Big Fight (1989)! Even at the time, I felt that 2D animation wasn’t really right for that world — it lacked energy. It turns out that Asterix and the other characters are very difficult to animate in 2D, Uderzo’s drawings are unique. It’s a world that is, paradoxically, fairly complex to visualize in animation. So switching to 3D was the perfect solution for The Mansions of the Gods. Since the characters were already there, we didn’t have to start from zero for each image, so there was none of the usual fear of the blank page. We were able to concentrate on pure animation, and I think it really shows in the final result.” 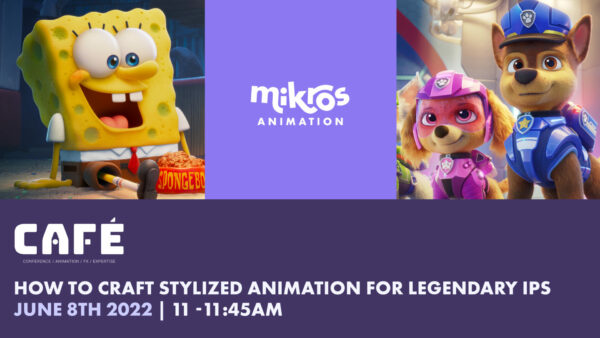 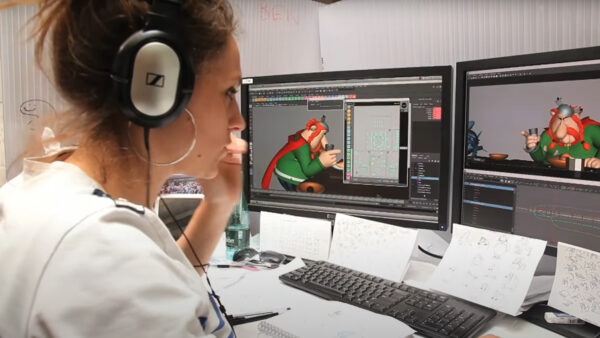 A MAKING-OF FOR ASTERIX – THE MANSIONS OF THE GODS

3DVF publishes today a making-of video of the feature animation Asterix – The Mansions of the Gods. 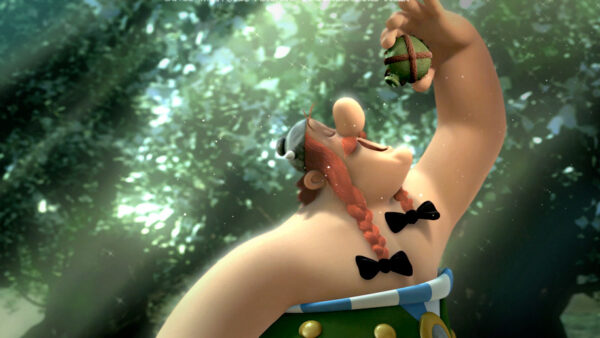 Mikros image announces the creation of its animation studio dedicated to feature films.